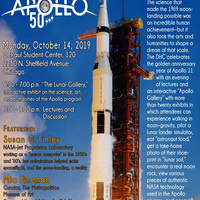 The 50th Anniversary of Apollo 11

The science that made the 1969 moon-landing possible was an incredible human achievement—but it also took the arts and humanities to shape a dream of that scale. The DHC celebrates the golden anniversary year of Apollo 11 with an evening of lectures and an interactive “Apollo Gallery” with more than twenty exhibits in which attendees can experience walking in moon-gravity, pilot a lunar lander simulator, eat “astronaut food,” get a take-home photo of their shoe-print in “lunar soil,” encounter a real moon rock, view various pieces of authentic NASA technology used in the Apollo missions, and generally learn about—and experience—the science, art, and humanities related to the moon and the Apollo program.

Susan G. Finley NASA—Jet Propulsion Laboratory; currently one of NASA’s longest-serving women; working as a “human computer” in the 1950’s and ‘60’s, her mathematical calculations helped make spaceflight, and the moon-landing, a reality

Mia Fineman Curator, The Metropolitan Museum of Art; Curator of the exhibit, Apollo’s Muse: The Moon in the Age of Photography

Rick Houston Author of Go, Flight!: The Unsung Heroes of Mission Control, 1965–1992, a celebration of the scientists, engineers, and NASA staff that made the moonshots possible

FREE and OPEN TO THE PUBLIC