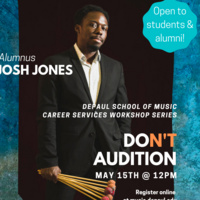 This event is open to current School of Music students and alumni.

When Josh Jones started to think of auditions as an opportunity to show his musical voice and ideas to a captive audience, he gained confidence in his choices and the execution of those choices, as well as the ability to calm his anxieties. This paradigm shift inspired him to collect his strategies in a sharable template to help fellow musicians change their audition mindsets.

Josh is a 2014 graduate from the Percussion studio at DePaul. A native of Chicago, Josh began his studies in percussion with the Chicago Symphony Percussion Scholarship Program.

Josh has been featured at Carnegie Hall, on radio and television, and has had two short documentaries made about his musical development and experience. He has authored a percussion method book series, “Spatial Studies for Hitting Things”, and writes musical and philosophical blogs on his website, drummojo.com.

Before his appointment to the Calgary Philharmonic Orchestra, Jones was the orchestra fellow of both the Detroit and Pittsburgh symphonies as well as a guest percussionist with the Chautauqua and Chicago symphonies. Josh recently won a principle position with the Kansas City Symphony.

Information for joining the session will be sent in advance to partipants.

This workshop is free and open to current School of Music students and alumni. Advance registration required to receive link for virtual session.