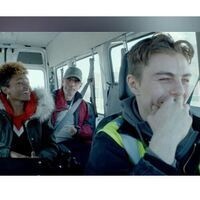 Medical transport driver Vic is late, but it’s not his fault. Roads are closed for a protest, and no one else can shuttle his Russian grandfather and émigré friends to a funeral. The new route uproots his scheduled clients, particularly Tracy (Lauren “Lolo” Spencer in a breakout performance), a vibrant young woman with ALS. As the day goes from hectic to off-the-rails, their collective ride becomes a hilarious, compassionate, and intersectional portrait of American dreams and disenchantment.

Russian-born Mikhanovsky grew up in Moscow where his early passion for cinema compelled him to skip school and go to the movie theatre across the street from his home where, often as the only person in the house, he watched countless films. After the Soviet Union collapsed, Mikhanovsky immigrated to Milwaukee, where he had a series of odd jobs, including driving medical transport for people with disabilities, and began making films. After graduating from NYU Film School, Mikhanovsky went on to make films in the US, Brazil, Russia, and South America. A Sundance Alum, his first feature SONHOS DE PEIXE won the Critics Week at the Cannes Film Festival.

Austen was a kid growing up in the Pacific Northwest when she showed her short stories to Ken Kesey, he told her she was a writer and mentored her early work. Austen worked under poet Seamus Heaney at Harvard University where she also studied law, and was the first American to receive a fellowship to the International Court of Human Rights and one of three students who founded the Harvard Human Rights Journal. The year Mikhanovsky came to America, Austen went to Central Europe. Fresh out of Law School, Austen was in Prague helping establish Vaclav Havel’s new government. Over a bet in an Irish pub, she penned a play that was picked up and produced. Austen's plays have been honored with numerous awards, commissioned by and seen at theatres around the country and Europe, including the Steppenwolf and Goodman. As a producer, Austen brings to the table her background as a former international lawyer whose work on ground-breaking transactions has been the subject of Harvard Business Review Case Studies.

7:30 On-stage Conversation with the filmmakers