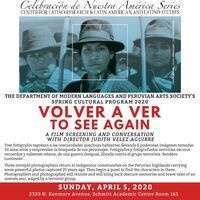 Between 1982 and 2000, the Shining Path (Sendero Luminoso) waged a guerilla war in Peru, becoming one of the most brutal terrorist groups of the 20th century. The conflict began in the Ayacucho region, where many Andean people were victimized and killed. Photographers Vera Lentz, Alejandro Balaguer, and Oscar Medrano managed to capture the horror and pain this war caused—and now, years later; they revisit the subjects and locales captured in their photos. Volver a ver tells a story that is not often told, about the tragedies that took place in Peru for nearly two decades, using the lens of art to reveal memories that question an official history that elides the indigenous contribution to the peace process.