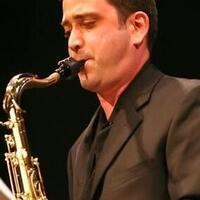 Jeremy Ruthrauff
Jeremy Ruthrauff is a saxophonist, composer/improviser and teacher based in the Chicago area active in the concert, jazz and experimental music arenas.

He has given solo and chamber music performances at prestigious venues throughout the United States and in Europe such as Merkin Hall in New York City, the Teatro Rossini in Pesaro, Italy, the Ojai Music Festival (guest artist with the Grammy award-winning ensemble Eighth Blackbird), Chicago’s Museum of Contemporary Art, Harris Theater for Music and Dance in Chicago, Chicago’s Steppenwolf Theatre, and the Renaissance Society.  He was recently featured as a soloist on the Chicago Symphony Orchestra’s contemporary music concert series MusicNow performing Jason Eckardt’s work Tangled Loops for soprano saxophone and piano.

Jeremy has premiered numerous new works by leading composers, including recently the world premiere of Jacob TV’s multimedia opera The News with Fulcrum Point New Music Project as part of the Off the Wall concert series at the Andy Warhol Museum in Pittsburgh.

He has been invited to give master classes at leading institutions such as the New England Conservatory of Music, American Composers’ Forum, University of Illinois, and others.  Recently, he participated in the Chicago Symphony Orchestra’s program Harmonia at the National Museum of Mexican Art in which soloists introduced music to children from Chicago’s Pilsen and Little Village neighborhoods.


Mischa Zupko
Mischa Zupko’s honors include first place in the Pacific Symphony Orchestra’s ‘AMERICAN COMPOSER’S COMPETITION’, first place in the Loudon Symphony’s American Composer Competition, the Lee Ettelson Composers Award from Composers Inc., co-winner of the USA International Harp Competition Composition Contest, three ASCAP Morton Gould Young Composers Awards one of which was the first place Kaplan Award, the ‘First Music’ award from the New York Youth Symphony, the Ruth and Emil Beyer award from the National Federation of Music Clubs, awards from the Bloomington Chapter of the National Society of Arts & Letters, the Jacob Druckman prize from the Aspen Music Festival, a CAP grant from the American Music Center, Dean’s Prizes from Indiana University and finalist in the Rome Prize Competition.

Mr. Zupko’s commissions include those from the Minnesota Orchestra, the Pacific Symphony, the St. Olaf Symphonic Band, the Barlow Endowment, the Fromm Foundation, the Gilmore International Keyboard Festival, the Music Institute of Chicago and the New York Youth Symphony. In addition, he has collaborated closely with several virtuoso instrumentalists including pianists Winston Choi and Lori Simms, violinist Minghuan Xu, saxophonist Timothy McAllister, harpsichordist Bradley Brookshire, flutist Thomas Robertello, harpist Maria Luisa Rayan, and organ/saxophone duo Doug Cleveland and Fred Hemke. In a more commercial venue, he has had the opportunity to work with Cortina Productions in scoring a short film exhibit that exists as a permanent installation at the new Indiana State Museum and with the Lilly Company in producing musical demos to promote a new product.

Mr. Zupko remains active as a performer. As a pianist, he has performed in a number of venues playing his own works as well has the works of his peers and more standard literature.  Among his performances include those with the Indiana University New Music Ensemble, solo and collaborative performances at the Mayslake Peabody Estate in collaboration with PianoForte and on the Fulcrum Point New Music series.  He has also conducted several ensembles, including the well-known Chicago Virtuosi chamber orchestra.

Mr. Zupko was appointed the 2010-2011 composer-in-residence with Chicago’s own Fulcrum Point New Music Project.  He also serves as the composer-in-residence with the Music Institute of Chicago where he runs an innovative new program for young composers called the Composers’ Lab.  In addition, he holds teaching positions at DePaul University, Roosevelt University, and Trinity Christian College and directs the music program at the Lutheran Church of the Ascension in Northfiled, IL.