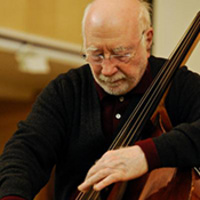 Born in Aleppo, Syria into a musical family of six boys and three girls, François discovered the double bass at the age of thirteen when one of his brothers brought an instrument home and allowed him to experiment with it. When the family moved to Beirut, Lebanon he found an old copy of Edouard Nanny's Contrabass Method in a tailor shop and with some difficulty, since he read neither music nor French, began to teach himself.

After nine years of work in Beirut, François saved enough money to move to Paris for a year. He was eager to go to the Paris Conservatory, meet with Monsieur Nanny and show him what he was able to do with the bass. When he applied at the Conservatory he was disappointed to learn that Nanny had died in 1947. He was also told that auditions were to be held in three days and that he would never have enough time to learn the required pieces. He asked for the music anyway and returned three days later to finish first among the applicants. However, his stay at the Conservatory was a brief one, since it didn't take very long to see that he was not only far ahead of the other students but of the professors as well! François Rabbath's uniqueness stems from his refusal to accept any traditional limitations. Whether performing his own fascinating compositions, the music of others or the classical repertoire, one is always moved by his profound musicianship and dazzling virtuosity. You quickly discover that he brings you such a sense of security that the most difficult passages sound effortless.

The importance of François Rabbath to the development of double bass playing can be compared with that of Paganini to the violin. Since the early 1800s when Nicole Paganini established the violin as a virtuoso instrument, solo violinists have practiced the most brilliant of instrumental art. Meanwhile, the development of double bass playing had been seriously neglected. The great and popular 19th century composers did not consider the bass worth their attention and in turn the bass repertoire did not attract potential virtuoso performers with enough genius to change the situation. It demanded an artist with the unique qualities of François Rabbath to break this impasse.

Free/non-ticketed and open to the public