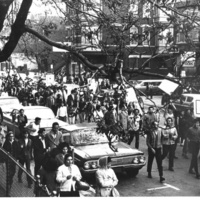 Across Chicago’s neighborhoods in the 1960s, young people worked to advance inter-racial coalitions and came together to demand better housing, food access, education, and police accountability. In Uptown, JOIN (Jobs or Income Now) was initiated by Students for a Democratic Society and brought idealistic community organizers to Chicago to build “an inter-racial movement of the poor.” In the later years of the decade, these community organizers connected with activists from other Chicago neighborhoods like Humboldt Park, North Lawndale and Lincoln Park and their primarily Latino, African-American, and Puerto Rican residents. Working on issues that affected all their communities, from welfare to the war in Vietnam, together these young people became leaders who represented their neighborhoods in a segregated city and brought people together in what was called a ‘rainbow coalition.’ Our panelists participated in these efforts, and share their memories of these geographies of Chicago and their work to advance social justice.