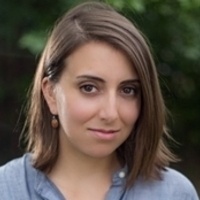 AND AGAIN is the story of four terminally-ill patients who are given new, cloned bodies as part of a pilot program called SUBlife. While the “SUBs” are exact replicas of the patients’ former bodies, they are also genetically perfect, spared the onslaught of environmental damage that accompanies a normal life. Their vision is perfect. Old injuries disappear. Food tastes different. Scars, tattoos, and even the muscle memory they have always taken for granted is now gone. Their lives are saved, but their physical identities have been wiped away.

The novel follows these characters as they reenter their lives and find that they have been both restored, and unmade, by this medical miracle. Hannah, an artistic prodigy, discovers she can no longer paint. David, a congressman, attempts to hide his transformation from the public even as he continues to grapple with his old habits. Connie, an actress whose bombshell looks are restored after a protracted illness, attempts to navigate an industry obsessed with physical beauty. And Linda, who spent eight years paralyzed after an auto accident, finds she can no longer connect with the family she once loved. Throughout the following year, their return to health proves fraught with unbelievable rewards, and unimaginable risks.

"And Again is a moving and beautifully crafted novel about the frailty of identity, the illusion of control, and the enduring power of love. A fantastic debut."-Laila Lalami, author of The Moor's Account, Pulitzer Prize finalist and longlisted for the Man Booker Prize

A native of the Chicago area, Jessica Chiarella is a graduate of DePaul's MAWP program and is currently a student in the University of California, Riverside's MFA in Creative Writing program.