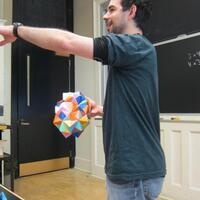 Abstract: Given a group G with generating set R, a natural question is to compute, for a group element g, the smallest length k so that g can be written as a product of k elements of R.  At this level of generality, the problem is undecidable.  However, for nice groups, the question often has a nice answer: for example, in the symmetric group, when R is the set of transpositions, the length of an element is determined by its number of cycles.  More generally, for many geometric groups (such as the finite real reflection groups, or the orthogonal group or general linear group on a finite-dimensional vector space), when R is the set of reflections, the length of an element carries an intrinsic geometric meaning.  In this talk, I will discuss three triples of theorems, some old and some new, about computing the reflection length when G is a linear or affine reflection group acting on a finite dimensional space.