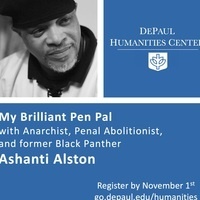 At a time in which virtual communication has all but replaced postal mail, we wish to celebrate a moment when checking the mailbox could be exciting and fun, to reinvigorate the pleasure of having a pen pal. Here's how it works:

Ashanti Alston is an anarchist, penal abolitionist, and former Black Panther. Growing up in New Jersey, he was witness to the 1967 rebellions that led to the liberation and occupation of various neighborhoods by the people who lived there—including Plainfield, his hometown. Inspired to get involved in direct political action, he joined the Black Panther Party at the age of seventeen, and later became a member of, and went underground with, the Black Liberation Army. For fourteen years, Alston served time as a political prisoner. Today he is still working with the Jericho Movement, which aims to free all political prisoners, and giving talks and writing inspirational analyses concerning the dismantling of the myriad oppressive regimes in which we find ourselves enmeshed. Reaching out to those struggling within what he terms “the matrix of resistance”—e.g., feminists, those in the LGBTQ+ community, anti-colonialists, animal liberationists, youth movements, the Zapatistas, etc.—Alston, a “Panther for life,” reminds us that core, personal relationships are at the heart of our power and that together “we can revisit the belief in victory being ours if we want it.”

“[T]he people can change this world. Mind that we’re on Turtle Island and like, man, we got to figure out how to do this in a way that gets this Empire off the back of the turtle. You know, it’s like whatever you do, you think about those most impacted: First Nations, Black folks, brown folks, poor folks, trans folks. Check in, let’s be there for each other so that we’re just not doing things off of the top. That is our strength, that is our power, transformation is there. But that’s the very thing that the system will work against, to keep us, like, at each other’s wits end, to keep us not caring. We can pull this off, and man, our children, we got these children, we got to do it for them.”