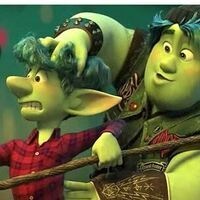 KELSEY MANN (Head of Story on "Onward") first came to Pixar Animation Studios in 2009, and was the story supervisor on the 2013 feature film “Monsters University.” In this capacity, he oversaw a team of 5-8 story artists through the process of storyboarding the film. Mann also contributed ancillary material during the production of the Academy Award®-winning feature “Toy Story 3.” Mann was soon tapped to direct the “Monsters University” short film “Party Central,” which was released theatrically in front of “Muppets Most Wanted.” Most recently, Mann worked as the story supervisor for “The Good Dinosaur,” and is currently the Head of Story for Pixar’s upcoming feature “Onward,” set to release in theaters on March 6, 2020.

Mann launched his animation career as an intern at Reelworks, a small Minneapolis-based commercial studio. From there, he moved to Los Angeles in 2000 and he went on to hold a variety of positions including animation, storyboarding, and directing for companies such as Cartoon Network, Warner Bros., and Lucasfilm Animation.

Raised in Burnsville, Minnesota, Mann attended Northern Michigan University in Marquette, Michigan. Growing up, Mann was a fan of everything related to film, animation, and puppetry.

FREE AND OPEN TO THE PUBLIC

Space is limited - you must reserve a seat using Eventbrite. All SCA screenings are OVERBOOKED to ensure seating capacity in the theater, therefore seating is not guaranteed based on RSVPs. Doors will open a half hour before the event begins and the RSVP list will be checked in on a first-come, first-served basis until the theater is full. Once the theater has reached capacity, we will no longer be able to admit guests, regardless of RSVP status. If there are additional seats, and you have not RSVPed, we will admit on a first-come, first-served basis after all rsvps have been seated.