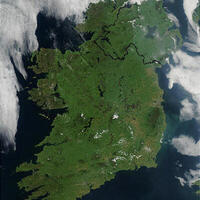 Over the coming months, Ireland’s Embassy and Consulates across the United States will join with the American Conference for Irish Studies & Irish Studies programs from coast to coast in a series of lectures and panels reflecting on the final – and perhaps most contested – years of the Irish Revolution, a period of intense political and social change in Ireland at the start of the 20th century.

The Embassy of Ireland, Consulate General of Ireland Chicago and DePaul University are delighted to present the second webinar panel in the "A Farther Shore" series. Ireland’s Ambassador to the United States, Dan Mulhall, will deliver remarks during the discussion.

Pre-registration for the webinar using the link below is required.

The event will be moderated by Dr. Mary McCain, director of the Irish Studies Program at DePaul. Panelists:

Dr. Mary McAuliffe is an assistant professor /lecturer in gender studies at University College Dublin, specializing in Irish women's / gender history. Her most recent publication was a biography of the feminist, trade union activist and revolutionary woman, Margaret Skinnider (UCD Press, 2020). She is the co-author of 'We were There; 77 Women of the Easter Rising' (Four Courts, 2016) and co-editor of 'Kerry 1916; Histories and Legacies of the Easter Rising' (IHP, 2016) and has published widely on aspects of Irish women's history, gendered and sexual violence in war, memory and history, social and political history, and public history. She was a member of the National Museum of Ireland Decade of Centenaries Commemoration Advisory Committee.

Dr. Timothy G. McMahon is an associate professor of history at Marquette University in Milwaukee, Wisconsin, and the Past President of the American Conference for Irish Studies. Tim is a social historian with interests in nationalism and national identity, popular culture (especially popular religion), and Empire. He is the author of Grand Opportunity: The Gaelic Revival and Irish Society, 1893-1910 (2008) and editor or co-editor of two other works. He is currently a Way Klingler Fellow in the Humanities and Social Sciences at Marquette, a three-year award, to facilitate work on his current book project about the impact of Irish partition on identities across the island.

Dr. Justin Dolan Stover is an associate professor of history at Idaho State University where he teaches on the transnational history of war and revolution, specializing in Irish history. His current research explores the environmental history of the Irish Revolution, represented in several recent publications, including “The Political Ecology of Nationalist Literature, 1880-1922,” in The Cambridge History of Irish Literature and the Environment, ed. Malcolm Sen, and “‘Shattered Glass and Toppling Masonry’: War Damage in Paris and Dublin,” in  Paris – Capital of Irish Culture: France, Ireland and the Republic, 1798–1916, ed. Pierre Joannon and Kevin Whelan.