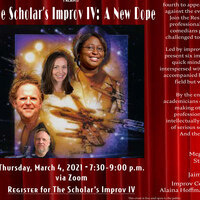 Unlike the first Star Wars movie, which said it was chapter four but was the first to come out, this Scholar’s Improv really is the fourth to appear. And the academic rebels really are going up against the evil Ivory Tower Empire of scholarly stodginess. Join the Resistance as DePaul professors and a troupe of professional Chicago comedians go toe-to-toe, with the comedians performing improv and the professors being challenged to lecture extemporaneously on surprise topics.

Led by improv comic Pete Parsons, the comedians will present six improvised scenes, showcasing their talent, quick minds, and artistry. These moments will be interspersed with mini-lectures by DePaul professors, each accompanied by a PowerPoint presentation in his or her field but which he or she has never seen before.

By the end of the evening, you’ll see that what academicians do by thinking, thinking on their feet, and making others think is a real art, and that what professional improv comedians do is a similarly intellectually and aesthetically rich enterprise worthy of serious scholarly reflection—as well as laughter. And the Death Star blows up (spoiler alert).