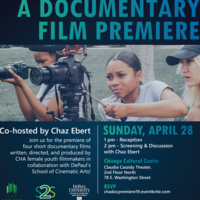 Join us for the premiere of four powerful short films by 16 female Chicago Housing Authority (CHA) residents exploring culture and community through their unique lens. This year's themes include a celebration of self-expression through hair, a positive perspective on Chicago's South Side, and humanizing our approach to drug addiction and homelessness.

The four documentary films are a result of the 2018 DePaul/CHA documentary filmmaking program; a six-week summer intensive where CHA highschoolers have the opportunity to learn all aspects of filmmaking from DePaul graduate film students and award-winning faculty mentors. They engage in every level of production including pre-production, camera operation, lighting, sound, and post-production.

Chaz Ebert of RogerEbert.com will participate in a post-screening discussion about the film topics and the power of documentary storytelling. Chaz visited the program last summer while the documentaries were in production. “ I was so excited about the program that I went to speak to the future filmmakers. I wanted them to know that I too became interested in film while I was living in CHA housing. It is important to me that they look to the future to see how what they bring to the program can help change the direction of their lives,” Chaz explained.

FOR AN UNFORGETTABLE LINE-UP OF DOCUMENTARY FILMS

The collection of award-winning films to be screened in the Claudia Cassidy Theater (2nd Floor) include: BIRTHDAY, SOUTH SIDE PRIDE, WITHOUT DYING & PHENOMENALLY ME.

"As filmmakers, we have the unique opportunity to provide a voice for those who might not otherwise be heard. We have the ability to humanize polarizing narratives and bring awareness to the social causes that concern us most.” - Liliane Calfee, Program Director.