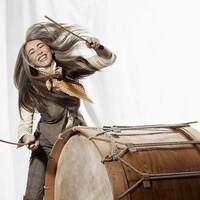 Evelyn Glennie fondly recalls having played the first percussion concerto in the history of The Proms at the Albert Hall in 1992, which paved the way for orchestras around the world to feature percussion concerti. She had the honor of a leading role in the Opening Ceremony of the London 2012 Olympic Games and her solo recordings, which now exceed 30 CDs, are as diverse as her career onstage. “Shadow Behind the Iron Sun” and “Sound Spirits” continue to be bestselling albums that amply demonstrate her brilliant improvisational skills. On this evening she joins together with DePaul Wind Ensemble, under the direction of Dr. Erica Neidlinger, for a performance of Joseph Schwantner’s Percussion Concerto.


Please be advised that this program concludes with a staged gunshot.