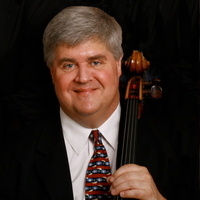 Stephen Balderston’s recital has been postponed due to a family emergency. If you had already purchased tickets a member of our box office staff will be in touch to offer you a refund, credit or exchange. Please check back to this page in the coming weeks for the announcement of the rescheduled recital date.

Stephen Balderston
Cellist Stephen Balderston is known internationally as a soloist, orchestral and chamber musician and coach of the highest caliber. Professor of cello at DePaul University School of Music, Balderston continues a demanding performance schedule in a variety of venues, and presents master classes around the United States. In recent years, he has performed solo works and chamber music with Daniel Barenboim, Pierre Boulez, Christoph Eschenbach, Lynn Harrell, Yo-Yo Ma, Menahem Pressler, Gil Shaham, Joseph Silverstein and Pinchas Zukerman. He has appeared as featured artist at the Ravinia Festival, the International Festival-Institute at Round Top, the American String Project, Bargemusic, the Park City Music Festival, OK Mozart International Festival, Santa Barbara Chamber Music Festival as well as the Affinis Music Festival in Japan and the International Music Festival in Shanghai, China.

Balderston was the cello coach for Daniel Barenboim's "West-Eastern Divan" workshops in 1999 and 2000 in Weimar, Germany, the 2001 Workshop held in Chicago, and the 2004 Workshop in Seville, Spain. In 2002 he accompanied a group of colleagues to Shanghai, China for that city's international music festival.  In August of 2004 Balderston was featured as lecturer, soloist and coach at the International String Music Festival in Taipei, Taiwan. Since 2002, he has been a participant, coach and soloist at a number of prestigious summer venues, including the Grand Teton Music Festival, Marrowstone Music Festival, the International Festival – Institute at Round Top, the Park City International Chamber Music Festival, the ARIA International Festival and the Northwestern University High School Institute. He has served as a chamber music coach for the Chicago Youth Symphony Orchestras. Balderston is a member of the American Chamber Players and the Evanston Chamber Ensemble.

Balderston was Assistant Principal Cello with the Chicago Symphony Orchestra for 10 years, and a member of the Saint Louis Symphony Orchestra for 10 years. He performed as soloist with both orchestras. Balderston began his studies on the cello with Gabor Rejto in his native southern California, and earned both Bachelor and Master of Music degrees from The Juilliard School, where he studied with Lynn Harrell.