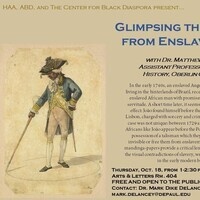 In the early 1740s, an enslaved Angolan man named João, then living in the hinterlands of Brazil, received an amulet from another enslaved African man with promises it could free João from his servitude. A short time later, it seems this object had the opposite effect: João found himself before the Portuguese Inquisition in Lisbon, charged with sorcery and crimes against the church.  João’s case was not unique: between 1729 and 1744, a series of enslaved Africans like João appear before the Portuguese Inquisition, each in possession of a talisman which they claimed could turn them invisible or free them from enslavement. This talk will argue that mandinga-papers provide a critical lens on Africans’ reckoning with the visual contradictions of slavery, writing, and self-representation in the early modern black Atlantic