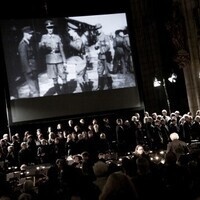 Emmy-nominated documentary film, Defiant Requiem, will be shown at DePaul University. Defiant Requiem is a feature-length documentary film which recounts the extraordinary, untold story of the brave acts of artistic resistance by the Jewish prisoners at Terezín (Theresienstadt) during World War II.
Film screening and discussion with Maestro Murry Sidlin hosted by Dr. Sara Kimble and Kelley Szany (Illinois Holocaust Museum & Education Center), co-sponsored by The School for New Learning and the Department of History at DePaul University.
http://www.defiantrequiem.org