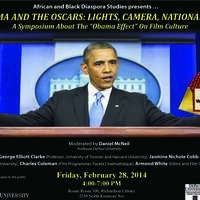 During the run up to the 2014 Oscars, film producers and executives have claimed that the election and re-election of President Barack Obama has erased racial lines and created a better country. They have also linked the ‘Obama effect’ to a spate of daring films about slavery and racial discrimination in the American past. This symposium brings together leading academics, critics, and film programmers to discuss the production, distribution and marketing of films in the age of Obama, as well as the ways in which Oscar-nominated films address the history of America and the Atlantic world.