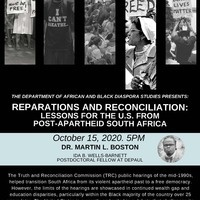 Reparations and Reconciliation: Lessons for the U.S from post-Apartheid South Africa

The fall of the violent racial caste system of apartheid and the tradition to what was heralded as a full and free democracy in South Africa in 1994, was aided by the restorative-justice public hearings of The Truth and Reconciliation Commission (TRC). The hearings allowed for victims of apartheid to give statements about their experiences on record as well as perpetrators of the violences of apartheid to give testimonies of their wrongdoing and request amnesty from both criminal and civil prosecution.

However, though truth and reconciliation has forced South Africa to confront the existence of its racist past, the limits of the hearings are showcased in the continued wealth gap and education disparities particular to the Black majority in the country.

As the United States is embroiled in a debate that challenges its institutions and corporations to confront anti-Blackness and take a stand for Black lives, South Africa and the TRC provide an important model for us to consider the differences between self-interested statements of solidarity and systemic repair.