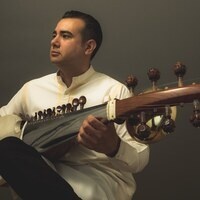 DePaul University welcomes acclaimed Sarode virtuoso, Alam Khan, accompanied by local and international favorite, Hindole Majumdar, on tabla. Khan is the son of the legendary sarode maestro Ali Akbar Khan. He began his training in the Maihar Seni Gharana at age seven, and by 1996, he commenced his professional career accompanying his father on stage. Within two years, he began his solo career. Alam Khan has performed at esteemed festivals and venues throughout India, Europe, the United States, and Canada.