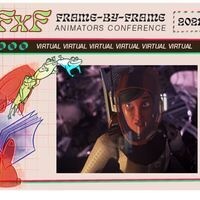 A Live Zoom Visit with

Saturday, May 15th
11 am Central Time

Joel D Benjamin Visiting Artist Presentation – 11 am
Transplanted to Chicago atop rampaging bison from northwest Iowa, Joel Benjamin is an award-winning animator and filmmaker of both short and feature-length animated films.

Joel started the minuscule but Emmy-Nominated Motion Graphics company Electric Beard Productions and works as a motion designer on corporate, commercial, and independent projects. He is also adjunct faculty of both SAIC and DePaul University teaching 2D and 3D animation. Most of his time is spent working on moving things around pixel by pixel and developing carpal tunnel.

Originally created by Epic Games for the hit first-person shooter game Unreal, the Unreal Engine has gone on to be one of the most popular and powerful game engines for commercial development.

In 2015 Epic began encouraging the use of the Unreal Engine for film and animation production and previsualization.  It allows animators to utilize real-time rendering with advanced features usually requiring long render processing.  It has since been used in feature films such as The Lion King and television series The Mandalorian and Westworld.

Joel will discuss and demonstrate his methods and experiences for utilizing the Unreal Engine in the production of his 3D animated film Hibernation.

Saturday, May 15th
11 am Central Time

College of Computing and Digital Media